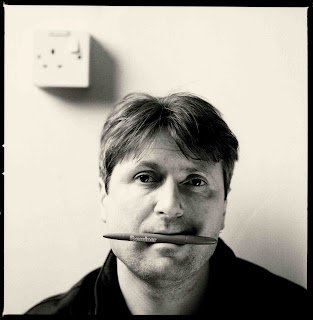 Prior to his appearance at this year's Long Division Festival, Simon Armitage answered a couple of questions about his life in a band, The Scaremongers, and how being a lyricist / singer differs from that of a poet.

- When you perform readings or play gigs, how do you pick your setlist? Do you empathise with bands like The Fall, who have such a vast history to pick from, and such a relatively short space of time to perform?

We have a repertoire of about 15 songs, so not an extensive choice!  I think in Wakefield we'll essentially be playing the album Born in a Barn from start to finish - like a band that's come together again after many years to re-live their moment in the sun, or perhaps the drizzle in our case.  We have been known to throw in the occasional cover version - Magazine's The Light Pours Out of Me we played at one gig.  Someone came up to me afterwards and pointed out it wasn't as good as the original.  Well, no (der).

- When an idea comes to you, be it an image, concept, piece of wordplay, do you instantly know which medium it will work best in (by which I mean poetry / prose / lyric) or is it more an organic process?

The songs were purpose built. Craig Smith had already penned a version of the lyrics, most of which were changed completely, but the odd phrase or chorus got through.  So they were, in the end, collaborative, rather than pieces I would have written left to my own devices.  Yes, I think I DO know from the outset what a piece of writing is destined to become - it's part of its conception - and it's rare that something makes a transformation into another form, say from song lyric to poem or the other way round.  I had considered publishing the lyrics at one point - I'm pleased with them - though not as poems.  Though they are, on the whole, too wordy.  I know this because I struggle to remember them (especially after a few drinks, which I need before we go on stage).

- Are you more drawn to a descriptive, long form lyricist like Jarvis Cocker, or the more concise, killer one-liner style of someone like Morrissey?

I think Cocker and Morrissey are very similar, though Morrissey got there first.  I like detail, especially of the kitchen sink variety, so plenty of noun objects and brand names.  And I like lyrics that tell a story, no matter how obliquely, or set a scene, or write a sketch.  I think that's very much part of the British tradition, both in lyric-writing and poetry.  I was hoping that we might be able to project the lyrics onto a big screen at , you know, with a bouncing ball going from word to word, to divert the eye from our general ugliness on stage at the very least.  But of course we've done nothing about it.  It took twenty five years to produce our first album, so we're not exactly known for our haste.

- The music industry appears to be imploding, with very little money left in it for anyone but the largest artists. I have a vague feeling that in a couple of generations, music production will fall in line with other art strands and be largely funded by subsidy / grants / community projects. Do you have any thoughts on this, and do you think Rock & Roll as we knew it is dead?

I think it's facing huge challenges and chance, but maybe that's a good thing because the whole scene had become fat, bloated and a total cliche.  It's virtually impossible for anyone to make any kind of rock and roll gesture these days without looking like a parody, so unless there's an element of self-deprecation or irony, you're just going through the motions.  Live music has become more important, as has diversification - sounds and attitudes that are less easily anticipated.  Is Rock n Roll dead?  Certain form of it, possibly.  The dinosaurs become extinct, and they had big teeth and massive bones, so it's entirely possible that rock n roll can take its place in the fossil record.  But there will always be popular music (as long as there are people!!!).