What's that, you've written a review? Of a gig?! Whoa man, no one WRITES stuff anymore, this aint the 19th century. What's that, you typed it, on a COMPUTER? Pah, so 20th century. Dont you know, everyone expresses their opinions via VIDEO now, on the INTERNET. Yeah, its quicker, takes less planning and requires no real skill or ability whatsoever. Just a basic camera and even more basi edit equipment... Well, if that's what the people want....

Which is a silly way of saying: here is our first Video Review of a recent gig at The Hop, in Wakefield of a brilliant gig featuring Allo Darlin, The Protectors, Standard Fare & The Spills. We hope you like it. If you do, we'll do some more. Its not meant to be serious, kinda quick and fun. Enjoy!

Dean Freeman
Posted by Rhubarb Bomb at 10:42 No comments: 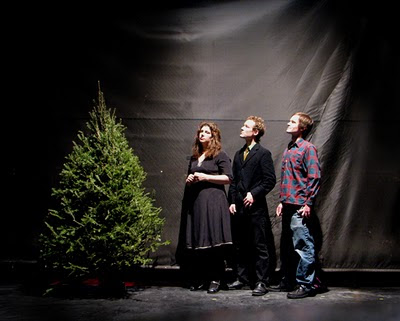 I first decided to listen to Low when I saw a link to them on Mogwai’s website. The detail was annotated with the comment ‘in a perfect world, they would be everybody’s favourite band’. How could I resist?

Now, many years later I’m a dedicated fan, and occasionally those words come back to me, as they did was I watched them recently at Brudenell. There is something quite perfect about the band and the music they make; understated, simple and achingly beautiful. They appeal to both the heart AND the head, which is rare too, and it’s dark and quiet and slow, but they have a sense of humour to match the tender heartbreak.

For those unaware of them up until this point, they immerged in the 90’s and came to represent the genre of ‘Slowcore’, a term they, naturally, hated. Amongst the dirgy, noisy grunge bands they purposefully played incredibly quiet, slow and ponderous music, to piss people off more than anything. At early gigs played in raucous redneck bars, when struggling to be heard over the jukeboxes, pinball machines and rambunctious audience, they would actually turn DOWN. But the joke kinda worked, and the wonderful music they created was extremely minimalist, but with a unique ear for melody, the focus of which was the beautiful harmonies between Guitarist / Singer Alan Sparhawk and Drummer / Singer Mimi Parker. 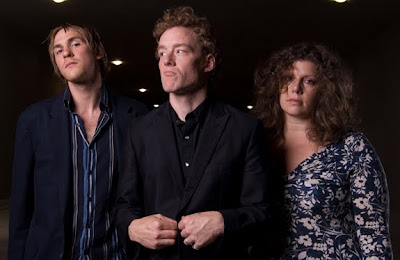 Having taken that idea as far as they felt they could over increasingly brilliant albums, they have, over the last 4 or 5 years, very successfully reinvented their sound with drum machines, organs, and, god forbid, distortion. But shows, such as this one always feature the bare bones of the band and as such it’s fantastic to hear some of the newer songs as they were probably written. Tonight Low are not promoting anything in particular but are apparently gearing up for a new record (Wikipedia has them down for an album in 2011 called ‘C’mon’ but I cant find anything else about it, bar a small announcement on their own site). So we get some songs that are either incredibly old or brand new – I’m not entirely sure. They treat us to a 12 minute run through of ‘Lullaby’ from their debut album, a perfect example of their early sound and approach. It was brilliant to see the usually bouncing Brudenell entranced in near silence – wonderful. See the video below, and you’ll see you could’ve heard the proverbial pin drop (though in this case its ‘glass smash’.)

Elsewhere we were treated to astounding run through of more recent material, ‘Monkey’ being the most special, as well gentle renditions of tracks from their last album ‘Drums & Guns’ (see 'Violent Past'). That genuinely unique atmosphere Low create was in full flow tonight, and they seemed in good spirits too.

It’s a hard gig to review really, coz basically they play slow and beautiful music and create a wonderful, warm feeling in the room. I had a fantastic night, despite been heavily jetlagged. Perhaps it was that state of tired confusion that led me back to the original Mogwai quote. Low are really not most people’s cup of tea I would say. They are the ultimate slow burners. And at the core of everything they do, I can’t help but find some kind of perfection. What a wonderful world it would be if they WERE everyone’s favourite band…

Dean Freeman
Posted by Rhubarb Bomb at 09:30 No comments: 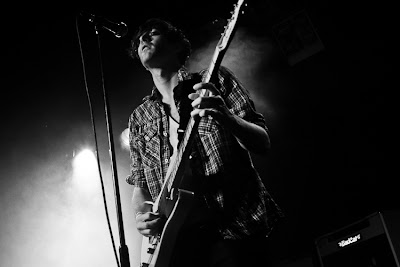 We Are Scientists are one of the few American bands that have found far more success in Europe than they have in their own country. The band have a geeky charm without trying to be too cool which makes them appeal to the British crowd, and in Keith Murray they have a frontman who has made a seamless transition from behind the drum kit.

Kicking off with a blistering version of Nice Guys from their latest album Barbara, Murray and Chris Cairn immediately took hold of the vociferous Leeds crowd. Unfortunately drummer Andy Burrows was not there, having been replaced by Danny Allen for the tour due to commitments with I Am Arrows.

They set the tone for the night when they play a track from their other two major albums-Brain, Thrust, Mastery and With Love and Squalor-within the first three songs of the night. The first half of the set continued with a couple of tracks from Barbara, which they followed up with crowd favourite, The Scene Is Dead their own swipe at hipster culture in their home city of New York. 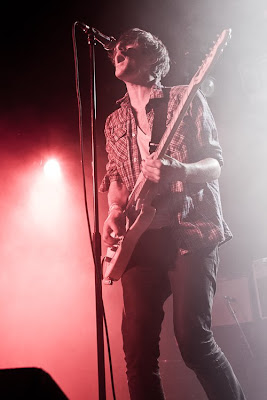 Murray was then replaced on guitar by the guitarist from support band Rewards as he serenaded the audience during the brilliant Textbook. With Murray back on guitar We Are Scientists hammered out a punked up version of their ode to drinking, Jack and Ginger, which sounded amazing.

The band finished their regular set with After Hours and The Great Escape which drew great receptions from the crowd as they are two of their biggest hits to date. We Are Scientists then came out for an encore, firstly playing Dinosaurs, then ending the night with fan favourite and highlight of the evening, the sublime Cash Cow. 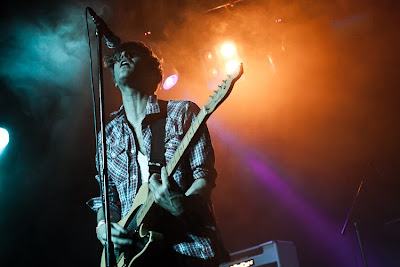 We Are Scientists may well be a band of geeks but they put on an excellent show and you’re guaranteed a good night if you see them, it is also this unashamed lack of ‘cool’ that makes them so great.

Photos by Danny Payne
www.dannypaynephotography.com
Posted by Rhubarb Bomb at 08:05 No comments: 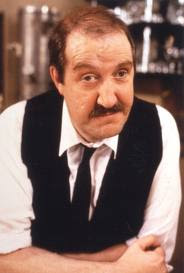 In celebration of the new, and final 2010 issue of Rhubarb Bomb, we are opening the doors to Cafe Rhubarb for the first time. Cafe Rhubarb is a small gaelic cafe where all kinds of creative and interesting people can come to meet friends, discuss the latest music, drink fine wine or just simply find a quiet corner and read the latest issue in peace. Often gigs can be loud and sweaty, and you dont get chance to just HANGOUT. Cafe... Rhubarb is a more laidback affair. Gentle music in the background. Candles in wine bottles on tables. Friendly waiters to show you to your table. Its at the end of an exciting weekend of gigs...so why not come down and let us know what you've been up to?

In honour of this more relaxed, social vibe, we have lined up 4 rather special acts, all of whom will be performing unplugged. There's no stage / audience divide at Cafe Rhubarb, they just find a spot in the Cafe and sing their songs. We're proud to present:

Your attentive and hard working waiting staff take time out from their busy duties to entertain you with the traditional music of their youth.

Tim takes time out from the recording of the new St Gregory Orange album to give us a sneak preview of some of those tracks, as well as others from his plethora of side projects and pseudonyms. A very rare acoustic only gig from the Ex-Lapel.

The Ran Tan boys punk spirited classic noise making will be presented in a totally new light tonight, playing some tracks from their upcoming split EP on Philophbia music.

The loveliest man we know will perform tracks from his recently released, and fantastic, album 'Senc to the Shaking', as well as some much newer stuff. We've had a sneaky peak of said new tracks, and the stripped down, fiddle and vocal approach is totally amazing.

THIS EVENT IS A CELEBRATION OF RHUBARB BOMB ISSUE 1.4. IT'S BEEN A REALLY COOL YEAR FOR US. WE WANT PEOPLE TO COME DOWN, TALK GOOD MUSIC AND LOOK FORWARD TO ALL THE EXCITING THINGS NEXT YEAR WILL BRING. THIS EVENT IS FREE ENTRY, COZ WE WANT YOU TO BE THERE x
Posted by Rhubarb Bomb at 04:09 No comments: