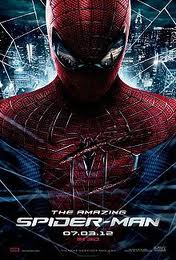 Like many, I felt this reboot had arrived far too early. Only ten years after the first instalment of the last trilogy is, quite frankly, ridiculous. It didn’t really help that the trailers seemed to play on the similarities more than anything – the swinging around New York, hanging upside down, doomed relationships and ‘great responsibility’. Same old, same old.

But it’s worth remembering that Spider-man was one of the early successes of the superhero genre now reaching saturation level. Only the original X-Men precedes it in this modern era and since the first Spider-man film Marvel have released 22 superhero films up to and including the recent Avengers. It would be fair to say, on the whole, the quality has improved, so perhaps Spider-man, with all Marvel have learnt, is once again fair game.

Whilst The Amazing Spider-Man doesn’t quite match the jump from Batman ’89 – ’97 to the Nolan trilogy (not does it try to), the differences are there, albeit in a lot more subtler form. It’s thankfully not taken the now predictable ‘darker’ route but has performed a similar trick to Batman Begins by at least making the world a lot more believable. The film could easily have been called Peter Parker, for it is he that is the real focus here.

The first half of the film is the definite winner, with the story progressing quickly without even a mention of the S word. Peter is that typically American hero of opposites: he’s a skateboarder but he’s really uncool, he’s a geek but gets the beautiful girl. But Andrew Garfield gets him spot on. He has the shy, slightly rude demure of a pubescent teenager, stuttering and grumbling in the face of authority like an emo Hugh Grant, all overly polite and painfully ignorant at the same time. There’s no angst here – at least, not yet – and at first the gaining of Spidey’s powers seems secondary to all else that is happening – a well thought out idea that makes Peter’s initial experimenting with his abilities believable and entertaining.

Naturally a ‘super-villain’ is required, as this IS a popcorn movie afterall. The Lizard initially seems a rather disappointing choice. Although Rhys Ifans performance as Dr Curt Connors is nicely low-key, the actual beast, once unleashed, is not so satisfying. As a villain for the opening of what will presumably be many more films, the ‘scientist gone mad’ cliché isn’t so strong, but within the context of the film, he plays an important role, akin to Scarecrow in Batman Begins. He is the right villain for the film, because of what we learn and what Spider-man learns about himself, despite this resulting in the story slipping into fairly well worn territory for the last third.

As Peter Parker fights The Lizard in his high school, it struck me that, stripped of all the history and expectation of the Marvel universe, this could have made a pretty decent ‘outsider comes good’ film akin to the ‘80s Teen Wolf. Such is the strength of the setup at the start, and of the characterisation. It doesn’t overblow it – there are still recognisable elements such as a battle on a bridge, Spidey trying to get a shot of a villain, and a Stan Lee cameo. But the last third brings in the usual ‘whole city in danger – who will save us?’ routine and it falls back on familiar ground which, with some kids under ten a few rows in front of me is, I guess, only right.

And the high school setting makes more sense to me than Spider-man as a photographer for the Daily Bugle (which isn’t even mentioned). Spider-man was always a bit of a cocky bastard and after seeing the reserved Peter take a beating from school bully Flash Thompson, you begin to see why he would be. And it’s perhaps as a film showing the transformation of a boy into a man that this works best. It isn’t far off being a great film in its own right – one compact story across one film. But of course, these things are ordered in trilogies now and it will be interesting to see how the series progresses and how much the angst is piled on.

Without the previous trilogy as a comparison this would likely be heralded as a great screen adaptation, with excellent performances, a confident pace, a strong narrative not reliant on set-pieces and a believable hero. But once that costume is put on, the feeling of déjà vu is inescapable, despite the excellent accomplishments elsewhere and the series may have to work harder on setting itself apart from Sam Raimi’s original vision.