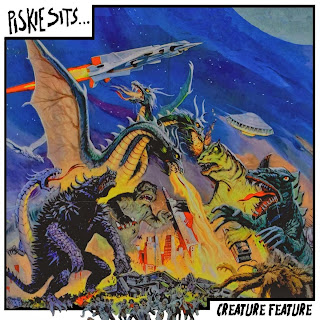 Creature Feature is culmination of the raw, edgy, “proper” music that has unmistakably been born and bred in Wakefield. At first the vocals feel rough, but after a few listens they only add the authentic sound the Piskie’s have created.

The opener, ‘I Know And You’ll Know’, sets the precedent for the rest of the album; catchy, wholesome, melodic songs alongside rigid and raw indie-rock guitars. Every track has potential for single release - from the poppy, upbeat Family Tree, to the simple and robust (and cleverly named) Feat. Pharrell Williams. Although each song showcases a different vibe this band effortlessly nail, Viktoria Plzeň is the most striking, and chronic chorus chanting is a known side effect. You have been warned.

Creature Feature will be released on the 21st October.

http://philophobiamusic.bandcamp.com/album/creature-feature
Posted by Rhubarb Bomb at 08:14